Web Video / Some Jerk with a Camera 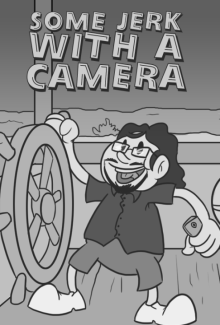 "Disneyland, USA. Who doesn't love this place? It's a home away from home, for kids of all ages. A passport to worlds unknown. A tentpole of the American zeitgeist. A place I'd like to point towards when they bury my carcass. A joyous, celebratory land of—FOUR TWENTY-NINE FOR AN ORANGE JUICE? YOU BUNCH OF FUC—"
— The opening of the first episode
Advertisement:

To all who come to this happy place, welcome. This is Some Jerk with a Camera's TV Tropes page.

Some Jerk With A Camera is an internet reviewer of Disney Theme Parks (and Universal Studios starting with season 3) and their assorted paraphernalia hosted by Tony Goldmark. His show blends park history lessons, articulate opinions, and wacky, frenetic, manic-style humor. Most bizarrely, a great deal of the live footage is "on location", meaning that he is frequently cussing it up within the confines of The Happiest Place on Earth.

His YouTube channel also includes two other series: "One Movie Later" and "State of the Parks". "One Movie Later" features Tony (and friends) viewing a theme-park-themed or -related movie, reviewing it, and finishing the video with the segment "What's The Attraction?", where they pitch absurd ideas to represent the film in theme parks. "State of the Parks" is an analysis and opinion series about new changes to theme parks once they are announced, although by the time they're finished and uploaded, the changes are sometimes completed.

Formerly a member on Channel Awesome, his videos can be found here

on Mr. Coat and Friends.

After the 2016 US Election, Goldmark has been known to be most active on Twitter discussing politics and the current events happening in America, giving a progressive perspective on the situations.

He also hosts a podcast with a rotating galley of guests called Escape from Vault Disney!, which discusses different works available on Disney+.

On the 10 Year Anniversary of his first review of The Country Bears, in a podcast episode made for Escape from Vault Disney!, he said that a 4th Season of Some Jerk with a Camera would most likely never come out. This is because he is too busy with other projects, such as State of the Parks and Escape From Vault Disney. Plus, with the COVID-19 Pandemic causing Disneyland to close for over a year, it was an even further catalyst to put more of his focus on those projects. On Facebook, he has said that he is mostly done producing video content, as Escape from Vault Disney! takes up too much of his time.

TVTropes: What You Do Instead Of Things!
"Michelle? Michelle, where are you?"
Feedback

You fool! That will NEVER work

Wealthy Businessman has this reaction to all of Walt Disney's ideas.

Example of:
It Will Never Catch On

You fool! That will NEVER work

Wealthy Businessman has this reaction to all of Walt Disney's ideas.