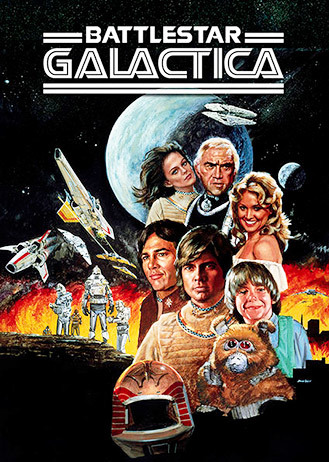 "There are those who believe, that life here, began out there, far across the universe, with tribes of humans, who may have been the forefathers of the Egyptians, or the Toltecs, or the Mayans. They may have been the architects of the great pyramids, or the lost civilizations of Lemuria or Atlantis. Some believe that there may yet be brothers of man, who even now fight to survive somewhere beyond the heavens..."
Advertisement:

At the end of a long, genocidal war between the twelve colony worlds of humanity and a race of robots called the Cylons, there finally appears to be a hope for peace. But the supposed end of the war is nothing more than a trap; humanity is almost completely wiped out when Cylon treachery (and a human traitor) catches them almost completely unawares. The survivors gather together to form a "rag-tag fugitive fleet" of refugees under the protection of the last remaining battlestar (the humans' most powerful class of space battleship), and flee Cylon-controlled space. Their goal is a legend — a lost thirteenth colony world, known as "Earth", which they hope can help them stand against the pursuing cybernetic enemy.

Television's supposed first attempt to cash in on the popularity of Star Wars (and hilariously, Lucasfilm tried to sue). Originally called Adam's Ark, this 1978 Glen Larson production fused a Wagon Train to the Stars gimmick to a dose of Von Danikenite "Ancient Astronauts" atmosphere and a dash of Mormon theology. The result was a Space Opera with unsupported pretensions to a Myth Arc that was noteworthy for a number of television firsts: first SF series set in a spacecraft with sets that didn't look like they were built from cardboard and drywall, first TV series to cost a million dollars per episode, and the first primetime series to recycle Stock Footage so much that everyone noticed it.

Although its first few episodes showed a certain amount of promise, the series quickly descended into a series of one Planet of Hats after another, many of them merely recycled plots from popular westerns. Its viewership ratings were high, but the TV network executives of the time had not yet embraced the notion of a million-dollar-an-episode series, so it was cancelled after one season. The fanbase was not amused.

In the face of a massive write-in campaign, the executives decided to Retool the series into a less expensive spinoff, and so Galactica was promptly resurrected as Galactica 1980, starring an older Boxey (now "Troy") as a substitute for Apollo.