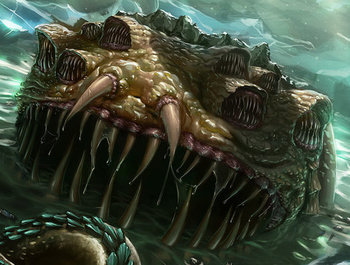 Every dentist's worst nightmare.
Sahjhan: You'll get your money.
Arnie: I've heard that one before. You know, I've got mouths to feed. Plus a family. Some of them have mouths, too.
— Angel
Advertisement:

In the same way that having extra eyes in unusual places can be unnerving, a creature with extra mouths can also be horrific, in a different way. The mouth is the organ of consumption, so a creature can be given extra mouths to show that it is a ravenous, hungry monstrosity. A massive paunch and lack of other sensory organs will create the image of an organism with no intelligence or purpose other than to eat.

To enhance the effect of the mouths, they may be equipped with More Teeth than the Osmond Family, or alternatively, might be gross and wide orifices with a thick tongue and smacking lips.

But there are many other ways to add mouths, and many places. They can be obvious or discreet, even hidden. They may even have special properties or powers. Their owner can be an Eldritch Abomination or a seemingly-normal human, or anything in between.

Sometimes the extra mouths will be able to speak separately, which probably isn't very useful for communicating, but allow Magical Incantations to be performed several at once.