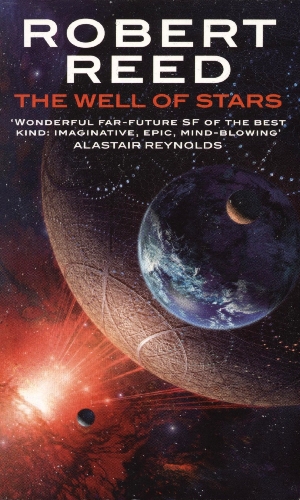 The Great Ship universe is a series of science fiction novels, novellas, and dozens of short stories, written by Robert Reed

In the distant future, an enormous ship larger than many worlds is discovered streaking towards the Milky Way at a third the speed of light. The near-immortal, TransHuman descendants of humanity are the first to set foot on the enormous ship, and the first to claim it. The ancient reactors are warmed up, and life is nurtured inside the millions of enormous caverns inside the ship's hull. A burst from the moon-sized engines catapults the ship around a brown dwarf, setting it into the galactic plane, where humanity sells berths on the Great Ship in exchange for worlds, information, and technology. The nearly indestructible hyperfiber hull makes the Great Ship Nigh-Invulnerable, a very desirable feature to the nearly immortal, fantastically rich sentient entities in the galaxy, who desire something safer than a planet to reside on. Technology, colonization rights, pledges of assistance, and information is sold for the right to reside on the Ship.Tens of thousands of species reside in the Great Ship, some interacting in the enormous cities and ports, others secluding themselves in distant caverns and empty fuel tanks.

The Great Ship universe is a fairly hard, Mundane Dogmatic science fiction setting, as it eschews FTL travel and many other staples of standard Space Opera

Marrow starts off several thousand years into the ship's voyage as Washen, one of the ship's high-ranking captains, receives a coded message to vanish along with every other important captain - as they are recalled into the core of the ship. Buried under the mass of granite and hyperfiber lies an entire planet inside the ship's core - Marrow - which is suspended in the center by enormous electromagnetic barriers. After a Space Elevator is lowered to the surface and an outpost is established, the electromagnic barriers strengthen to the point where the space elevator is crushed, stranding almost all important captains on the surface of what is essentially a Death World, forcing them to try and carve out a living and await rescue. But Marrow has strange effects on their children, and there's no sign of the rest of the ship even knowing they are missing...

The Well Of Stars takes place several hundred years after the events of Marrow - the Wayward mutiny has been crushed, but at a terrible cost, crippling the ship as it plunges into an abnormally dense and dark stellar nursery, the home of a species - or entity - that calls itself the Polypond. With no way to avoid the nebula, and with every surrounding civilization either revering the polypond or no longer existing, the captains brace for the worst. A substantial portion of the plot deals with the enemies of the ship's builders, the !eech, possibly being in pursuit of the ship and that the ship may have been intercepted by this party already, long before the stories began.

Some short stories were released at random in science fiction periodicals, but it appeared The Well of Stars was the intended, open-ended conclusion of the series. Reed released The Greatship collection of short stories in 2013 which included a story set on the post-Well of Stars Greatship, and the ship has new owners and is on a mission far from the Milky Way at this point. The next year, Reed released the seemingly unrelated The Memory of Sky which was a novel focused around an immortal child, Diamond, in a strange world that seems almost like a tiny Dyson sphere. Some of the characters seem to have a few of which have obvious characteristics of the Greatship's alien races, but this is the only apparent tie to the Greatship storyline that is immediately evident. Eventually Diamond must escape his world and finds himself emerging to be face to face with the Greatship's captains.

The author once again seemed to leave the Greatship universe hanging with no hope of resolution, until an interview with the author cryptically revealed the name of a new novel The Dragons of Marrow which had been released in digital form in mid-2018. The Dragons of Marrow per the foreword, will be followed by a trilogy of new books takes place on on a war-torn Marrow where Marrow's cycle of expansion and purging of all surface life has coincided with the major captains each leading technically-advanced but tribal factions, with each captain possessing an implanted doomsday device of sorts that kickstart's Marrow's purge cycle in advance of schedule. A major wrench in this cycle comes from the arrival of the characters from The Memory of Sky, one character of which seems to somehow already possess one of these doomsday devices. Hints to the purpose of the Greatship are provided, in addition to the fact the !eech war for the ship seems to have been lost, millions, perhaps billions, of years ago and the captains have been in a cycle of war ever since.

Many of the short stories set in the Great Ship verse have a mix of action, mystery, with the occasional bit of Slice of Life for the immortal passengers.

Tropes featured in the Great Ship universe, and in the short stories: