Literature / Heroes Save the World 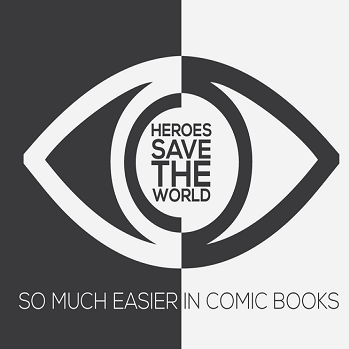 Across the world, one hundred adolescents unexpectedly find themselves in possession of superpowers, running the gamut from conventional to world-breaking to annoyingly limited. But despite the diversity of powers, certain patterns emerge, and as the Children begin to find each other, they realize that the world itself may be in great peril.
Heroes save the world, but will they succeed in being heroes?
Advertisement:

On January 1st, 2014, Simon Martin was given the power to touch a person and see how they were going to die. At the same time, ninety-nine other teenagers around the world were given powers of their own. Shortly thereafter, it becomes apparent that the world is in great danger, but the Children are a destabilizing element that might prove to be as dangerous to the world as anything else.

The story is about geopolitics and events on the world stage as much as it is about the main characters: in the first twelve chapters the narrative visited four countries, and more will be addressed in the future.

in September 2016, and updated every Tuesday and Friday...up until the end of 2017, when it hit a seemingly indefinite hiatus.