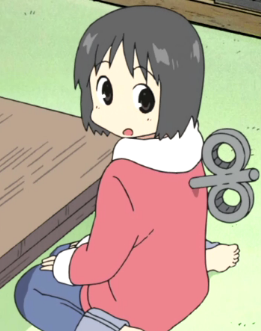 It's uncommon that you wind up with this in real life.
One good way to show that something is a toy, toy-themed, or just mechanical is with a wind up key. Especially complements Toy Time, or alternatively, Clock Punk.
Advertisement:

It can also serve as a Weaksauce Weakness if something needs to be wound up to keep functioning.