Win Her a Prize 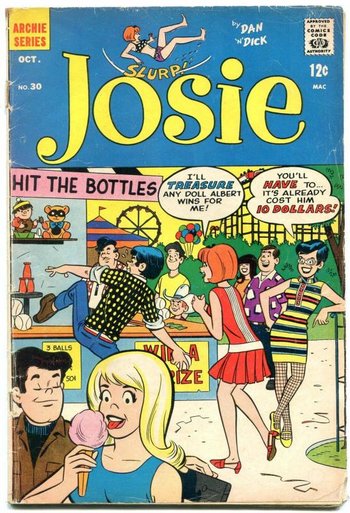 "A giant chicken. I must be the luckiest girl in the world."
— Raven, Teen Titans

Bob and Alice are at the carnival on a date...or not. They see one of those popular carnival games, and Alice starts eying one of the prizes, usually a stuffed animal. Bob realizes that he has a chance to prove how manly he is and give her a present at the same time. It's a win-win! The catch? The Rule of Drama and Rule of Funny say that Bob can't get it on the first try. There are five possible outcomes to this trope:

There are other possible outcomes, but these are the most common. Usually is a boy gaining (or trying to) a prize for a girl, but also this can be seen in a girl getting the prize for the boy or an adult (mostly parents) gaining it for a child.

Carnival games used for this trope are usually strength tests, which amplify the hope Bob has to prove his manliness (hey, that's actually a real word). Games of chance are sometimes used as well. Also this can count for toy grabber machines that usually can be found on amusement parks and carnivals, too (but seen also in malls).

Sub-Trope of Circus Index, since carnivals and amusement parks are included in this index. See also Girls Love Stuffed Animals. Compare The Lady's Favor. It could lead to Literally Prized Possession.