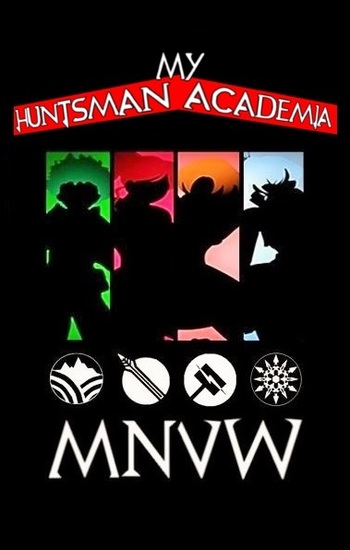 This is the story about how you became the world's greatest Huntsman.note All credit for the image goes to its original owners.

Izuku Midoriya wanted to be a Huntsman his whole life to bring hope to those in need, just like his idol, Toshinori Yagi. But Izuku was a "Moon Child", or "Broken" as more callous people would say. His soul was terribly weak and he had no way to project an Aura. Despite this, he didn't give up hope, enrolling in a combat school and trying his damnedest to achieve his dream, even if he knew that it was probably pointless.

Now seventeen years old, he's on his way to Beacon Academy, the finest Huntsman Academy in the world. Although his Aura needs work and his new Semblance, One For All, has some serious kickback, Izuku finally has a chance to turn a hopeless dream into reality. He's gotta put in some serious effort to make that happen and has a ton of important decisions to make, whether it's doing one-on-one training to get the hang of One For All, choosing whether to run from or fight the nastiest of Grimm, or just figuring out what to say to a girl he just met, this would-be Hero has a lot on his plate and big shoes to fill.

How is he going to handle all of this?

is a My Hero Academia/RWBY Fusion Fic Quest Thread written by gorilla_fingers on Spacebattles. Taking place in the world of Remnant with My Hero Academia's Hero Course students becoming Huntsmen-in-Training, it follows Izuku's path to follow in his idol's footsteps as a hero in the making along with all of the choices that come with it.

It is also being edited into traditional fanfic format by Shovern and Wind-Waker and can be read on FanFiction.net

. It isn't exactly the same; for one, mentions of the mechanics of the game (so common in the Quest proper) are removed. Sections are trimmed down, edited, and moved around to make it third-person instead of second-person, not to mention have a more consistent feel (one canon omake had its ending (which made it more comedic) removed so as to make it a touch more somber).

My Huntsman Academia provides examples of: