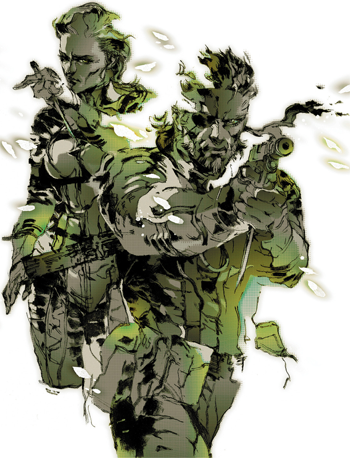 "As long as we have 'loyalty 'til the end,' there's no point in believing in anything, even in those we love. The only thing we can believe in, with absolute certainty... is the mission, Jack."
— The Boss
Advertisement:

After the highly polarized reception that Metal Gear Solid 2: Sons of Liberty received, series creator Hideo Kojima had his work cut out for him: make a Metal Gear game that would reunite the series' Broken Base. Metal Gear Solid 3: Snake Eater, released in late 2004, did the job with flying colors.

The year is 1964, at the height of the Cold War. The United States of America have formulated a plan to covertly extract a Soviet defector, scientist Nikolai Stepanovich Sokolov, before he is forced to complete a nuclear superweapon for the USSR. To this end, a lone FOX operative codenamed "Naked Snake" is sent deep into enemy territory by the CIA to secure Sokolov and escort him across the Iron Curtain without leaving a trace.

The mission goes horribly wrong when Snake's lifelong mentor and maternal figure, the legendary soldier known as "The Boss", suddenly intervenes to abduct Sokolov and announce her defection to the Soviet Union. She escapes with the help of her personal "Cobra Unit" and their new commander, Colonel Yevgeny Borisovitch Volgin, who detonates an American nuclear warhead to cover their tracks and frame the USA for his own treasonous activities.

A tense backroom deal is struck between the USA and the Soviet Union in order to prove the former's innocence and stop the warmongering Volgin from staging a coup against the latter. Codenamed "Operation Snake Eater", Snake must infiltrate the Soviet jungle of Tselinoyarsk, eliminate Volgin and his rogue faction, destroy Sokolov's superweapon, and assassinate The Boss. But as the mission goes on, Snake learns there may be more to this operation - and The Boss's defection - than meets the eye...

In terms of gameplay and its mechanics, Metal Gear Solid 3 puts more emphasis on survival than previous games, as it requires the player to hunt, eat, and heal their wounds manually to survive. Kojima Productions swapped out the static indoor maps of the previous games with sprawling outdoor environments that require the player to make use of camouflage to stay hidden from enemy sentries. The player can also distract sentries with a variety of tools, from tranquilizer darts to pornographic magazines, in tried-and-true Metal Gear fashion.

With its far less convoluted story, fans viewed Metal Gear Solid 3 as a return to form. It featured another main character switcheroo, but this time, Kojima Productions eased the pain by replacing Solid Snake with the man he was cloned from, Naked Snake. Since it takes place in the defining years of the Cold War, the plot line embraces every spy movie trope in the book — which includes a James Bond-esque musical intro sequence. Toss in a truly bittersweet Twist Ending, four memorable main characters, an amazing sense of level progression, as well as a number of tense and memorable boss fights, and it doesn't take much effort to see why many fans, gamers, and critics alike still think of Metal Gear Solid 3 as one of the best games, if not the best, on the PlayStation 2.

While Metal Gear Solid 4: Guns of the Patriots shifted the focus back to Solid Snake, Metal Gear Solid 3 spawned a series of direct sequels starring Naked Snake in the forms of Portable Ops, Peace Walker, Ground Zeroes and The Phantom Pain.

Warning: Spoilers relating to the game's Prolonged Prologue, the Virtuous Mission, will be unmarked below.