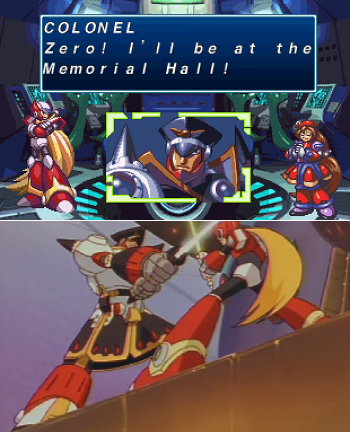 Sometimes, instead of allowing the player to face a Video Game boss directly in battle, the game will instead present the battle as a non-interactive sequence or cutscene. This has a few advantages, in that by removing the player's skill from the equation, the battle can achieve a specific outcome using strict choreography — fully rendered CGI cutscenes can apply their Cutscene Power to the Max, with the player and/or boss executing awesome acrobatic feats that would not otherwise be possible in an actual, in-game battle. This may also happen if the "Boss" was fought in a way outside the purview of the game's genre (or the limitation of its engine).
Advertisement:

On the other hand, if the player was expecting to engage the boss directly, seeing the battle play out with no input from them whatsoever can feel very anticlimactic, even more so than a Zero-Effort Boss.

This can be downplayed somewhat if the cutscene employs Press X to Not Die, allowing the player some interactivity even if they have no ultimate say in the battle's outcome (as in most cases, failing to hit the right button immediately fails the battle, forcing the player to try the sequence again).

Compare Coup de Grâce Cutscene, where the Boss Battle itself was fully interactive, but a cutscene is used to depict the killing blow. See also The Unfought.