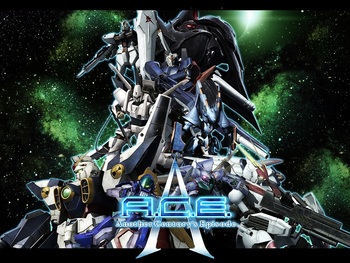 Another Century's Episode or "A.C.E." is a Massive Multiplayer Crossover Mecha Game series made by a combination of Banpresto (most famous for the Super Robot Wars games) and FromSoftware (makers of the Armored Core series and Metal Wolf Chaos). Simply put, think of A.C.E. as Super Robot Wars, but played in the style of Armored Core.

Much like Super Robot Wars, the story in each game in the series is a mashup of multiple Humongous Mecha series (mostly of the Real Robot variety), and revolves around a piece of Applied Phlebotinum which happens to fall into the hands of an Original Generation character.

The games are lauded for managing to keep (nearly) each and every playable mecha completely true to their counterparts without sacrificing gameplay or fun in the process.

The five games in the series are:

Tropes found within the games which are separate from/contrary to the series the characters and mecha originated from include: