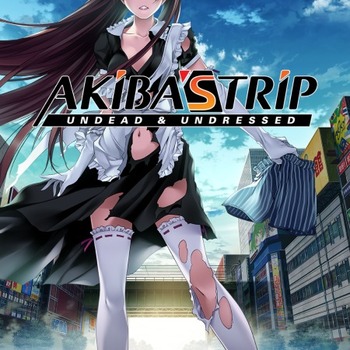 Not your average maid...or human...
Advertisement:

Akiba's Trip: Undead and Undressed (Akiba's Trip 2 in Japan) is the second installment in the Akiba's Trip Beat 'em Up series by Acquire. The game was released in 2014, with its English version handled by XSEED Games in the same year.

The game takes place in Akihabara, a district of Tokyo famed for being a electronics and Otaku mecca. You play an everyday geek named Nanashi who attends a job interview only to be captured by a sinister organisation looking to transform you into an vampiric "Synthister". With the aid of a mysterious Action Girl named Shizuku, you escape your captors and decide to fight against the Synthiser conspiracy aiming to secretly conquer Akihabara. (And to do this, you must hunt down the Synthisers masquerading as normal humans and strip them naked. It's a Weakened by the Light thing. Kinda.)

in 2016, brought over in English by XSEED Games and PQube for US and UK territories. The game would see rerelease in 2017 as Akiba's Trip 2+A, with the "A" in the title referring to content from Akiba's Trip the Animation.

Of particular note is that this was the first game in the franchise to be officially translated into English, beating all previous releases of the first Akiba's Trip for years. In 2019, XSEED Games announced plans to internationally release it for PlayStation 4 under the title of Akiba’s Trip: Hellbound & Debriefed, using the game's Plus version as its basis.

This game contains these following tropes.