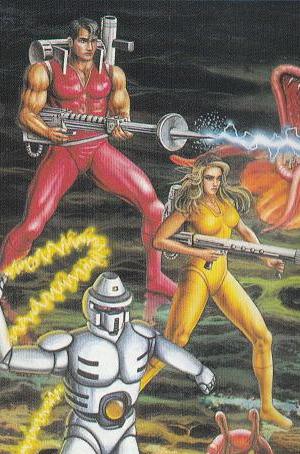 A Sega arcade game released in 1990 that's a cross between a Beat 'em Up, a Shoot 'Em Up and a Rail Shooter, depending on the section of the level. It was developed by Team Shinobi and essentially it's Golden Axe remade in a sci-fi setting. It was ported to the Sega Genesis, Master System and various home computer formats.

The "plot" of the arcade version is thus: a man, a woman, and a robot witness an alien invasion and take their "Alien Burger" joint, which is also a van, relabel it "Alien Busters", and proceed to kick some ass. The Genesis version's plot is a more straightforward alien invasion story that takes itself at face value.

For the most part, you run through levels and fight grotesque and creepy looking aliens with moves that include punches, kicks, and shooting them close-range. There are moments where you switch to a side-scrolling shooter where you run forward automatically, and have to shoot enemies as you go. Most levels also contain at least one segment which switches to a first-person view where you move a crosshairs around to aim your gun and shoot enemies. The environment itself is destructible in these segmants.

The last level is a Womb Level, as you suddenly get eaten by a strange looking alien, which immediately flies off into space.

The ending of the original arcade version is just silly, and has the characters more-or-less "dancing" to weird random imagery, before you're graded on your performance by the heroes of other Sega games.