"The Time Bomb Is Set."
— Announcer 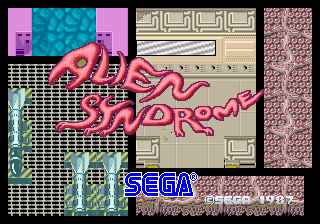 Alien Syndrome is a 1987 arcade game released by Sega. One of the earliest examples of an overhead action shooter, the game revolves around two alien exterminators named Ricky and Mary (allowing for 2-player co-op play) as they're sent on a mission to rescue the inhabitants of a space colony infested by strange creatures. Their objective is to rescue the 16 hostages in each of the spaceships that form the colony before time runs out and then proceed to the exit in order to fight one of the alien bosses. There are a total of seven stages, with the final stage being a single boss battle against the alien mastermind.

Alien Syndrome was ported to a variety of 8-bit platforms at the time, including Sega's very own Master System and Game Gear, as well as a Famicom/NES port released by Sunsoft in Japan and Tengen in the U.S. There were also two updated remakes as well: a 2004 version by 3D Ages released for the PS2 (as part of the Sega Classics Collection in the U.S.) and a 2007 version by Totally Games released for the Wii and PSP.