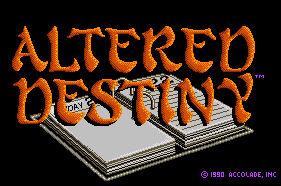 Altered Destiny is a Point-and-Click Game (though the player interacts with it via Text Parser) released by Accolade in 1990 for the Amiga and IBM Personal Computer.
Advertisement:

Picking up his TV from the repair shop the night of his stay at home date, Yuppie middle manager PJ Barrett is alarmed to find his set was mixed up with the one belonging to the Conan lookalike leaving the store as he drove up. When he tries to set up the TV he's been given instead, PJ's sucked through the screen and transported to the planet Daltere, where he learns the omnipotent Jewel of Light has driven the alien Helmar insane. If PJ wants to make his date, he'll have to stop Helmar from destroying the world.