Video Game / Back to the Future Part II & III 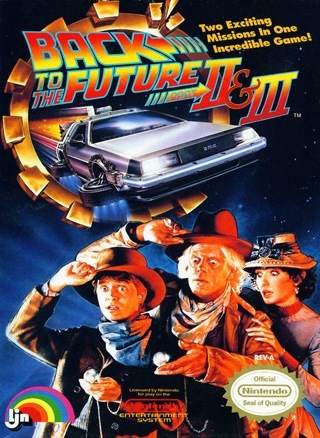 In the first part of the game, Biff Tannen has not only given his past self of 1955 the Gray's Sports Almanac to change the future with, but he has taken thirty other artifacts out of their proper time periods and scattered them about through time, resulting in the space time continuum falling apart. As Marty McFly, you must travel between the three time periods (1955, 1985, and 2015) to find the artifacts and bring them back to their proper places in time, all the while watching out for Biff Tannen as well as your past selves. In the second half of the game, Marty is stuck in 1875 (instead of 1885 as in the Part III movie) and must find ten more items and bring them back to their proper places so he can keep his friend Doc Brown from altering future history.