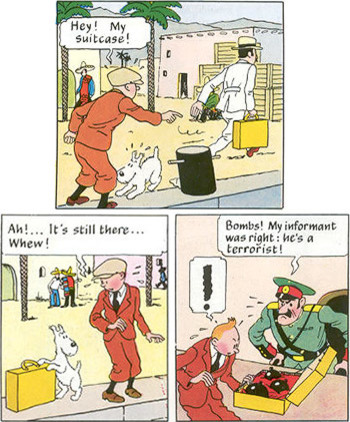 There are three or more identical bags. One bag contains jewels or top secret documents, other bags contain other items of a random nature (and in wildly variable values) and one bag always contains underwear.
Advertisement:

Through a series of random accidents and deliberate thefts the bags get switched. Repeatedly. The remainder of the story is a form of a farce based on people trying to get the "right" bag. The bags will change hands many times through many different players, and always on camera so that the audience can actually try to play the Shell Game and keep track. Unfortunately, they never actually open the bags to check that the contents are correct until they find themselves in utterly humiliating circumstances. Except for the person with the jewels: chances are they're the unlucky one who lost their underwear. Chances are once they see the jewels they won't really care too much any more.

The funny pretty much requires at least three bags. If there are only two then the players who are trying to get the bags will easily be able to hunt down the only other bag. But with three or more bags things just get insane.

A common joke in a Screwball Comedy.

There's also a variant where the wrong lunch was grabbed - apparently, in television shows, kids always pack their lunch in a plain brown bag instead of an easily-identified character on a reusable box or bag. Note that in this case three bags are not needed. The humor can come from the child getting raw giblets for lunch instead of their peanut butter and jelly.

Compare Switched at Birth, Shell Game. See also Stolen MacGuffin Reveal. When one character gets two or more objects mixed up, that's Unfortunate Item Swap. If there's only one bag but screwy items keep getting pulled out, that's Rummage Fail. If the swap was intentional, see Replaced with Replica.

Alternative Title(s): Suitcase Mix Up, Picking Up The Wrong Bag