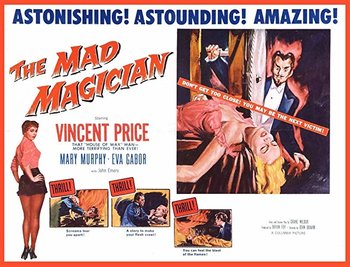 The Mad Magician is a 1954 American horror film in 3D, directed by John Brahm and starring Vincent Price, Mary Murphy and Eva Gabor.

In the late 19th century, Don Gallico (Price) is a master at devising magicians' illusions who attempts to break out on his own as Gallico the Great. His first performance is interrupted mid-show by his employer Ross Ormond (Donald Randolph). When starting out, Gallico had signed an exclusive contract with Ormond to provide him with any illusions he created. Ormond has a court order forbidding Gallico from using any illussions he created in is own act. This pushes the already unstable Gallico over the edge and he sets out to get his revenge against those who have wronged him, including Ormond; his ex-wife Claire (Gabor), who is now married to Ormond; and rival magician The Great Rinaldi (John Emery), who is Ormond's business partner and the main beneficiary of Gallico's illusions. A clever young police detective, Lt. Alan Bruce (Patrick O'Neal), uses a new identification technique, fingerprints, to identify the killer.

The Mad Magician contains examples of: