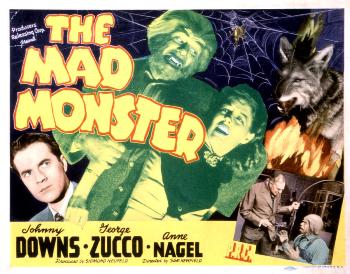 The Mad Monster is a 1942 Sci-Fi Horror B-Movie produced and distributed by Producers Releasing Corporation.

Dr. Lorenzo Cameron is a discredited — and quite mad — medico who has discovered a way to turn his gardener, Petro, into a wolf man. The lycanthropic experiments succeed only too well, and although Dr. Cameron spouts plans of turning his discovery into a weapon in defense of the civilized world, he instead unleashes his creation on those fellow scientists who had engineered his ouster from academia in the first place.

Before long, however, the good doctor is unable to control the wolf man, who threatens to kill everything in his path. Only newspaper reporter Tom Gregory and Lenora, Cameron's innocent daughter, may be able to stop the monster.