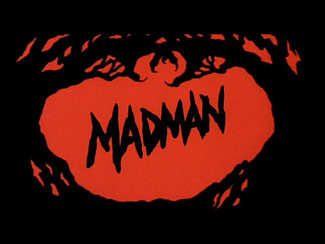 "Madman Marz... he's real!"
"It all started during a campfire at North Sea Cottages, a special retreat for gifted children...."
— Opening credits
Advertisement:

Madman is a horror movie released in the year 1982, during the golden age of the slasher movies.

The movie opens in a summer camp, where a group of people are sitting around the campfire telling scary stories. After one of them has sung a song based on the subject, the camp counselor Max tells the local legend of "Madman" Marz, who killed his family brutally with an axe and was hanged for his deeds by the townsfolk. According to him, Marz lived through the experience and is still wandering in the surrounding forest.

While telling the story, Max says that his name must not be said out loud, because then he will come to get you. One of the kids laughs at the story, and starts mockingly yelling Marz's name. Unfortunately for them all, Marz hears the mocking, and starts picking them one by one....

The film was successful in the drive-ins and its popularity grew when it was released on VHS. It has its own small devoted fanbase and Paul Ehlers, who played the titular villain, is still making appearances at conventions.

There are rumors for possible continuation, but nothing conclusive has been said yet.

Not to be confused as a film adaptation of the comic Madman, though there were plans to do one.

"The trope lives/Beware the Madman Marz":