These Are Things Man Was Not Meant to Know 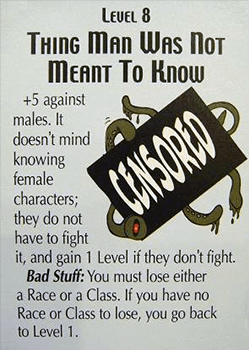 It, uh, doesn't have to be this literal.
"Learn from me, if not by my precepts, at least by my example, how dangerous is the acquirement of knowledge, and how much happier that man is who believes his native town to be the world, than he who aspires to become greater than his nature will allow."
— Victor Frankenstein, Frankenstein
Advertisement:

No, this Description of These Are Things Man Was Not Meant To Know Here should not be!

Do not read this page. Just click "back", or close this page right now. Your sanity, nay the fate of all mankind, will be in danger.

You didn't listen. Damn you. Don't you know this knowledge is kept secret for a reason? Your feeble, mortal minds cannot comprehend the vast complexity of what you are seeking to learn. Pray that complete madness is the worst consequence of your transgression. Just don't blame us. You Have Been Warned.

It's a pretty safe guess, though don't confirm it, that these things resemble Mind Screw and are a Mind Rape.

Learning this can cause you to Go Mad from the Revelation, and is a standard trope of a Cosmic Horror Story. A major reason on why Curiosity Is a Crapshoot. If you can even read and/or understand these final words, pity the Mad Scientist who seeks out this knowledge, for his experiments will Go Horribly Right. This may be used as an Armor-Piercing Response.

And no, Brain Bleach won't be helpful in this case.

You still wish to go further? The Keeper of Forbidden Knowledge will not keep you at bay? You don't believe that we honestly do this for your own safety? Sigh. Well, don't say we didn't warn you. Here are the tropes that this Super-Trope unleashes upon you!

If your mind has become a horrifying alien monstrosity by this point, avoid interacting with humans, they're infectious. And if it hasn't... well you're really something special aren't you?

Not to be confused with You Do NOT Want to Know, Women's Mysteries (things men were not meant to know).