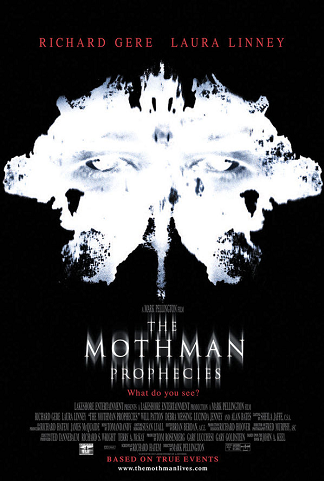 Inspired by… real events occurring between November 1966 and December 1967 in the town of Point Pleasant, West Virginia. Produced by Lake Shore Entertainment released by Screen Gems and directed by Mark Pellington.

The film starts with a reporter, John Klein (Richard Gere), and his wife Mary (Debra Messing) looking for a new house. They get into a car accident, during which Mary first witnesses the Mothman. She is later diagnosed with a brain tumor and dies soon after. Before she dies, she draws some really creepy pictures of a Winged Humanoid.

A couple years later, John gets lost on a road trip and ends up in Point Pleasant, West Virginia, a normally sleepy backwoods town; however the townsfolk have become wary of strangers because of the recent supernatural events. The townsfolk have had a series of encounters with the Mothman, and soon a mysterious being named Indrid Cold calls John in the middle of the night. With the help of a local police officer, Sergeant Connie Mills (Laura Linney), John tries to solve the meaning of the Mothman's presence.

The movie is based on a book written by journalist, parapsychologist, and ufologist John A. Keel which was first published in 1975, studying the events that occurred in the town in 1969. Despite the title, the original cover art, and later, the art of the movie poster, the book focused mostly on the UFO sightings in Point Pleasant at the time along with some mention of shifty men in black snooping around, with only a few chapters dedicated to the sightings of the Mothman entity. The documentary Eyes of the Mothman recounted the story in connection with various legends such as the Curse of Cornstalk.