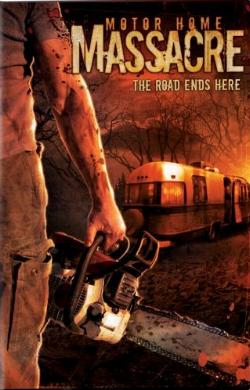 That should be a machete.
The road ends here.
Advertisement:

With the parents of his sort-of pal, the nerdy Benji, out of town for six weeks, a douchebag (look at that beard) named Roger convinces him (primarily by promising him a hot date) to take his old man's vintage hunting RV on a road trip with their friends, a wigger named Lincoln, his girlfriend Brooke, the ditzy Faith, and her boyfriend Nick. Brooke also convinces her friend Sabrina, who is still hurting after a nasty breakup with her ex-boyfriend Tom seven months ago, to tag along, saying she needs to get out and move on, and what better way to do so than on a trip to the wilderness, with the eligible (for obvious reasons) Roger? Enroute to their destination, Black Creek Campgrounds, the group stop at a dilapidated general store, where the weird proprietor, a redneck by the name of Jebediah, informs them that they'll likely have the area all to themselves, due to a young couple, Jake and Melanie, being hacked to bits with a machete while out camping the previous night.

Deciding to ignore Jebediah's gruesome story, our characters head to the campgrounds anyway, only to discover Jebediah wasn't lying about the double homicide when they happen upon the crime scene. Stopping to speak to the attending park ranger, the group are told the gate to the area should have been closed, and since they've trampled on to the crime scene, they are prohibited from leaving until the morning. Deciding to make the best of things, the group find a spot, and engage in the usual shenanigans teenagers in slasher films get up to (drinking, drug use, sex, pranks, etc.) shortly after meeting a lone neighboring camper named Nicole, who has just been dumped, but is still getting scary calls from her ex-boyfriend, who is threatening her and whoever she is with.

Soon enough (and after a nasty run in with a drunk Jebediah, and his cousin Terry) the coat and night vision googles adorned figure who butchered the campers the other night shows up with a machete in hand, ready for some more carnage over the roaring campfire.

No relation to Trailer Park of Terror.