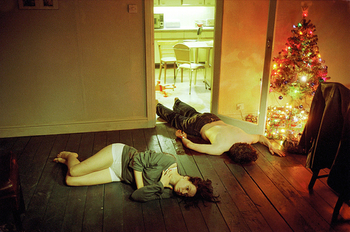 The opening scene, setting the tone of the movie perfectly.
"Be brave."
— From the will of Morvern's boyfriend
Advertisement:

Morvern Callar is the debut novel by Scottish author Alan Warner, first published in 1995. Narrated in the first person, it tells the story of Morvern, who wakes up near Christmas to find her boyfriend dead in the kitchen.

Following her boyfriend's suicide, supermarket clerk Morvern Callar passes off his unpublished novel as her own. With the money her boyfriend left for his funeral, she leaves Scotland for Ibiza where she travels with her closest friend. The journey prompts a series of internal and external transformations for Morvern— ones which bring to light her experiences of grief, memory, freedom, and desire.

A thoughtful work of art, Morvern Callar is an intense but quiet reflection on the consequences and morality of carelessness.

The book was made into a film in 2002, starring Samantha Morton and directed by Lynne Ramsay (We Need to Talk About Kevin, You Were Never Really Here).

This book and the film based on it provides examples of: