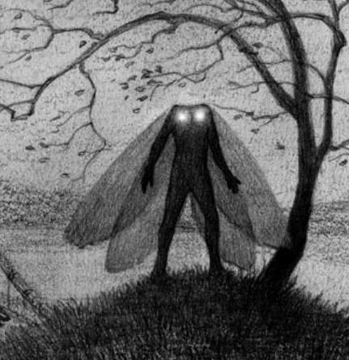 The Mothman is a relatively recent addition to popular folklore, first emerging in 1967 from the association of sightings of a strange Winged Humanoid figure around the city of Point Pleasant, West Virginia with the disastrous collapse of a local bridge

later that year which killed 46 people. In part due to media popularization in the years after the disaster, some came to see a causal link between the sightings of the entity dubbed the Mothman and the collapse.

Mothman sightings decreased sharply afterwards, but the occasional incidents and resurgences in media eventually led to a formalization of the current mothman myth. In modern popular culture, the mothman is typically depicted as an entity with the characteristics of a human and a moth or butterfly, either as a full-on insect-like humanoid or as an indistinct shape with the silhouette of large, mothlike wings—all of this in spite of the fact that reports of the creature described it as more closely resembling a vaguely humanoid bird than an insect. Enormous, glowing eyes are also a common feature, as the original sightings often reported otherwise indistinct figures with large, luminous eyes standing out against the gloom. The creature may not always have a distinct head, instead simply having a rounded torso marked by two glowing, lamplike eyes.

Mothmen, due to their association with the Silver Bridge collapse, are often linked with disasters. Typically, their appearance will be treated as a sign or omen of some imminent calamity in the coming future. Mothmen rarely do anything themselves to hinder the event or speed it along: indeed, their motives are almost always deliberately mysterious. They watch from the sidelines, observing seemingly random people, and then quietly vanish after the disaster invariably comes to pass. They do not usually attempt to communicate with people, but those they observe may be stricken with nightmares relating in some form to the future tragedy. Their motives are often unclear at best — they may be actively trying to cause the disaster, they may be trying to warn people of their imminent danger, or they may simply be passive watchers, come to observe the calamity for reasons of their own.

These mysteries may not be actually resolved in the works in which they appear — indeed, their mysterious and frustratingly inscrutable natures may be actively played up to increase the aura of suspense and mystery around these entitles, or to unnerve both the characters and readers.

Subtrope of Our Cryptids Are More Mysterious and Winged Humanoid. See also Lovecraft Country, an area close to the mothmen's West Virginian homeland, and Macabre Moth Motif. They may also be linked to The Greys, because few cryptids aren't. See also The Slender Man Mythos, for a very similar creature, and The Flatwoods Monster, a fellow West Virginian cryptid.