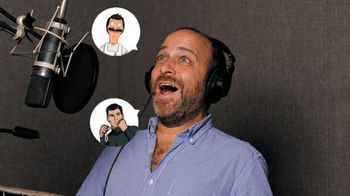 Harry Jon Benjamin (born May 23, 1966 in Worcester, Massachusetts) is an American actor, writer, and comedian, best known for his distinctive voice and for his roles on the animated shows Archer (as Sterling Archer), Home Movies (as Jason and Coach McGuirk), Dr. Katz, Professional Therapist (as Ben Katz) and Bob's Burgers (as Bob Belcher). He's also had guest appearances on The Best Show and cameo appearances on Last Week Tonight with John Oliver.