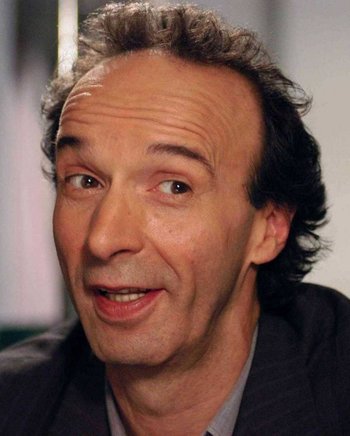 He is most famous internationally for directing, writing and starring in the 1997 comedy-drama picture Life Is Beautiful. Celebrated for pulling off an artistic challenge that Charlie Chaplin would not have dared and Jerry Lewis chickened out of showing, it presented a sensitive Dramedy about The Holocaust. The film came home with three Academy Awards, including Best Actor for Benigni, and numerous other awards.

Unfortunately, Benigni would later squander his artist reputation and Auteur License in 2002 with his pet project Pinocchio, with himself in the title role, becoming a critically derided Box Office Bomb, followed by another bomb, The Tiger and the Snow. His directorial career still hasn't recovered since. Ironically, he would appear in a much better received production based off the story in 2019, in a role most have said he should have played in his own film, that of Geppetto.

Benigni has also written and performed the stand-up comedy show Tutto Dante, inspired by Dante Alighieri's The Divine Comedy and the Tuscany tradition of improvisatory poetry, with much success in his native country.