Our Cryptids Are More Mysterious 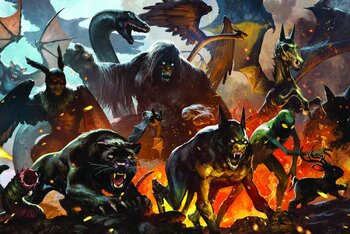 The biological equivalent of UFO sightings, cryptids are legendary beings and mythical creatures which are rumored to exist in Real Life, in isolation or in hiding, yet unrecognized and regarded as implausible by mainstream science.

Some may be relict survivors of species believed to be extinct, or known organisms displaced into inappropriate habitats; others are unlike any known species, with characteristics that border upon the supernatural. Folk legends tied to specific cultural traditions (Algonquian wendigos, Navajo skinwalkers, Japanese youkai, Irish aes sídhe, etc.) aren't usually considered cryptids, nor are other overtly supernatural entities like ghosts. Aliens usually aren't either, unless they've been on Earth long enough to "go native" and be sighted in the wilderness.

Those cryptids that haven't received heavy media attention, so cannot be classified under the sub-tropes listed below, may have works of fiction in which they're featured listed here on this page. Works that feature a wide variety of cryptid types, or follow cryptozoologists' attempts to investigate them, also fall under this trope. Series that only have a Cryptid Episode usually leave their existence open to question, whereas cryptid-themed works generally do reveal their creatures to the audience (if not the characters), sooner or later.

Subtrope of All Theories Are True. Compare Our Monsters Are Weird, which is for creatures that are too bizarre for even cryptozoology (the study of cryptids) to claim they're for real. Also see Fearsome Critters of American Folklore.

Specific cryptids with their own pages:

Alternative Title(s): Our Cryptids Are Different