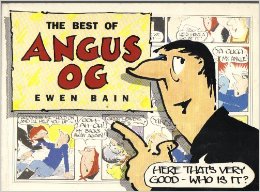 Angus Og is a Scottish Newspaper Comic which ran from 1959-1989 in the Daily Record and written by former Western Islander, Ewen Bain.

It chronicled the life of Angus Og, a young man who yearned for escape from the hard life of a crofter in Scotland's Western Isles and undertook many wacky schemes in order to achieve that.

Angus was aided and abetted by his friend Lachie and pursued ardently by his sometime fiancée Big Mairileen. His life was complicated by the ludicrous nature of some of his schemes and the less ambitious citizens of the fictional island of Drambeg on which he lived. The strip also had a somewhat political nature, as it both poked fun at the sometimes absurd nature of British politics and also the difficulties of everyday life at the very edge of the British Isles far away from the decision makers in London.

The strip was not always limited to the mundane and it often took on a fantastical nature as it also featured (amongst other things) talking cats, the island's "Spey Wifey" (witch) handing out curses, and even Old Nick (the Devil), himself. Written mostly in the dialect of the Western Isles it forms a fascinating insight into a turbulent period in Scottish history. In the late 1990s some of the strips were published in compilation books called "The Og Logs"

This Work Contains Examples of: