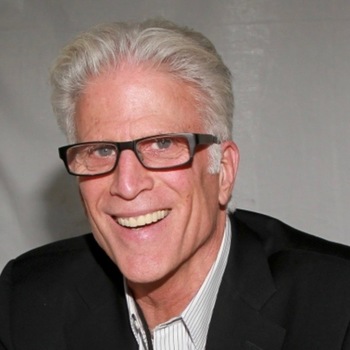 "I think it's the actor's job - when you think of being typecast or getting out of the shadow of whatever you've had success in - it's up to you as an actor. The industry will always want to hire you for what you were successful in last and what made money. But you can say no to that and look for other parts."
Advertisement:

Edward Bridge "Ted" Danson III (born December 29, 1947) is an American actor, author, and producer. A sitcom icon, he's best known for playing lead character Sam Malone on Cheers. He also starred as the title character in Becker (both Cheers and Becker were produced by Paramount Television), and has had prominent roles in such series as Gulliver's Travels (the 1996 miniseries), CSI, Curb Your Enthusiasm, Damages, Bored to Death, Fargo, and The Good Place.

Danson has been nominated for 15 Emmy Awards, winning two. He has been married to fellow actor Mary Steenburgen since 1995.