Yowies and Bunyips and Drop Bears, Oh My 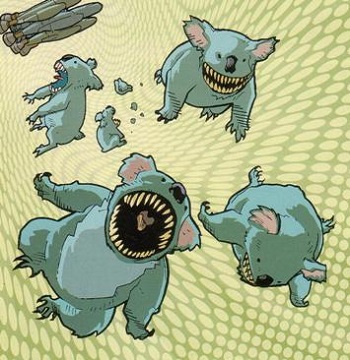 Drop Bears: Widdle cuddly bears of death.
Blake frowned, thinking back on the stories she'd heard growing up. "[...] Travelers and explorers would come back to town with crazy stories about 'Bunyips', and 'Drop Ursas'".
Ruby looked at her curiously. "What are they like?"
Blake snorted. "Depends on how much the storyteller had been drinking."
— Boldores and Boomsticks
Advertisement:

Like most countries in the world, Australia has a number of cryptids and mythical beasties allegedly lurking out in the forests and outback (because actual Australian Wildlife just isn't interesting or dangerous enough). This page covers the most common creatures found in Australian folklore.