Fanfic / The Peace Not Promised 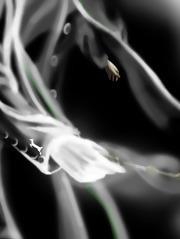 After all this time. Even in another life. Always.
What if I were to tell you, that not all of that needs to be? If the loss of her friendship was the only regret you needed to relive. Everything else would be up to you.
—Dumbledore
Advertisement:

The Peace Not Promised is a Harry Potter fanfiction by Tempest Kiro. Upon his canonical death, Severus Snape meets Albus Dumbledore in the afterlife, and is offered a chance to go back to an earlier point in his life (shortly after the breaking of his friendship with Lily Evans), to remedy his many regrets. He accepts in hopes of keeping Lily alive; everything else, he feels, is secondary to that. However, the changes in himself and the changes he brings about once he arrives in the past have the effect of softening her anger toward him and persuading her to give him another chance.

It is published on Fanfiction Dot Net (here

) and Archive of Our Own (here

The Peace Not Promised provides examples of:

open/close all folders
A-D
E-K
L-P
Advertisement:
R-Z
Dumbledore did not seem fazed. "Indeed Severus, so I think you know what you must do."
Bring this knowledge to Dumbledore. The still living Dumbledore of his time. To pledge his service once more.
For the chance to save Lily.
"I will do what it takes."