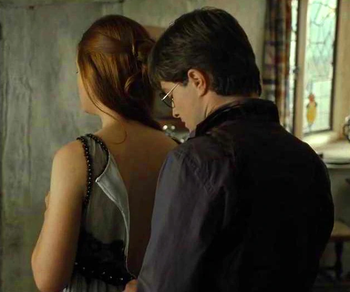 "Zippers are primal and modern at the very same time. On the one hand, your zipper is primitive and reptilian, on the other, mechanical and slick. A zipper is where the Industrial Revolution meets the Cobra Cult."
— Tom Robbins, Jitterbug Perfume
Advertisement:

A very common element of a Ship Tease, when a man helps a woman zip up or down her dress. Has the charm of being innocuous and platonic on the surface, but brings the Theiss Titillation Theory into full effect—the fact that the dress is just partially on lends a great deal of tension. May also work with necklaces, clasps, buttons, snaps, or anything that could possibly reveal her back. Compare the Hands-On Approach.

May work for men in the case of a Wholesome Crossdresser (and either a male or female admirer). Can't Tie His Tie applies a similar Ship Tease element to traditional male attire.