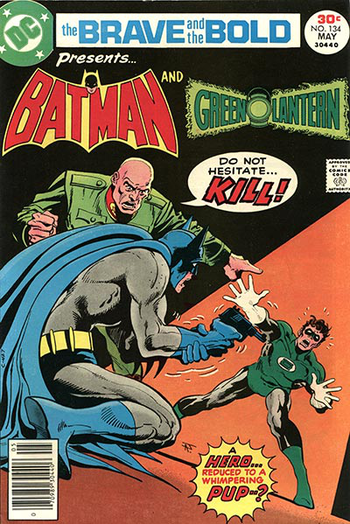 "Every profession has occupational hazards. Butchers cut themselves, house painters fall off ladders, and operatives get asked to help kill their own people."
— Michael Westen, Burn Notice, "Question and Answer"
Advertisement:

The hero is in the role of a Fake Defector. One of their friends has been captured. The Big Bad hands the hero a gun and tells them to kill them. The gun is almost always empty.

In extremely rare situations, if the gun is actually loaded, the tested subject may succeed at pulling the trigger, injuring or even outright killing the Big Bad.

In addition, if the good guys are using this ploy, they will be careful to commend the testee's reluctance to pull the trigger, since killing should never be easy. (Well it depends on the person on whether or not its easy.)

Note for the Yanks here that "mate" is used in the British slang meaning of "friend", not necessarily one's actual mate, though occasionally killing your spouse or lover is used as a particularly strong test.

This is a subtrope of Allegiance Affirmation, and If You're So Evil, Eat This Kitten!. It is often used as a stage in Bring Them Around — once the character has done something, it's harder for him to leave.

Compare Involuntary Battle to the Death, Finish Him!, Deadly Graduation.