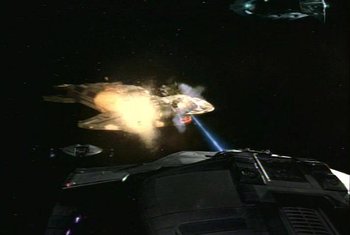 The two biggest alien State Secs of the Alpha Quadrant get their collective asses kicked
In the second half of the two-parter, the Obsidian Order/Tal Shiar joint fleet of twenty cloaked ships enters the Gamma Quadrant with the intention of destroying the Founders' home world. As a test of his loyalty, Tain assigns Garak the job of extracting whatever Odo knows about the Dominion and the Founders. He gives Garak a new Techno Babble device which can prevent changelings from shape-shifting or reverting to their liquid form. This is torture for Odo, when the time comes for him to regenerate.
Advertisement:

Sisko and the DS9 crew come after the fleet in an attempt to rescue Odo, against the direct orders of Admiral Toddman of Starfleet. Lt. Eddington sabotages the cloaking device, so the Defiant is exposed to any Dominion ships it may encounter, and falls behind in the pursuit.

Though Garak's torture of Odo reveals no valuable information — because he knows nothing useful — it does force him to admit to himself and Garak that he longs to return to the Great Link to join the other Founders.

The fleet arrives and attacks the Founders' world, but soon realizes that the world is empty and it is a trap. They are surrounded and quickly overwhelmed by 150 Dominion ships. The Romulan captain reveals himself to be a changeling and lets Odo and Garak escape, because "no changeling has ever harmed another."

Garak tries to get Tain to escape with them, but Tain's despair has made him unreachable, and Odo has to drag Garak away. They are rescued by the Defiant arriving just in time. The two men come away with a mutual new understanding: both want to go home but can't.