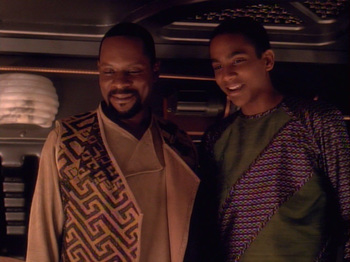 And Starring... Sisko's awesome new goatee.
Sisko returns to DS9 with a new goatee and a new hobby: building a "light ship" (a ship with sails that are pushed by light pressure from a sun) based on ancient Bajoran designs. Bajoran legends say that they explored their region of space as far as Cardassia in these ships 800 years ago, though it seems physically impossible, since solar pressure can't push anything faster than light-speed. Sisko hopes to duplicate their voyage as far as possible. The Cardassians consider the whole thing to be Bajoran fairy tales, and Dukat contacts Sisko before he makes the journey out of "concern".

Jake goes along for the adventure, and uses the opportunity to show his father one of his stories and tell him about his desire to be a writer. He has been offered a fellowship at a university on Earth, but isn't sure whether he's ready to go that far from home yet. He also tells Ben he needs to start dating again, and that there is a freighter captain named Kasidy Yates with whom he wants to match Ben up.

The ship is damaged by space debris, but when they are about to give up and signal for help, they get caught in some sort of space wind that sweeps them at warp speed all the way to Cardassia. Dukat and a small fleet of shapes are waiting to welcome them, as their arrival just so happens to coincide with the (not at all conveniently timed) discovery of an old solar ship on Cardassia that not only proves the ship's viability, but lends credence to Bajoran claims of ancient contact.

Back on the station, Dr. Bashir is tense because a ship carrying the classmate who beat him for the role of valedictorian will be visiting the station. He agonizes over how to deal with her, only to discover that she doesn't even remember him and that the assignment they were competing for, Chief Medical Officer of the USS Lexington, turned out to be a lot more boring than his life on Deep Space 9.