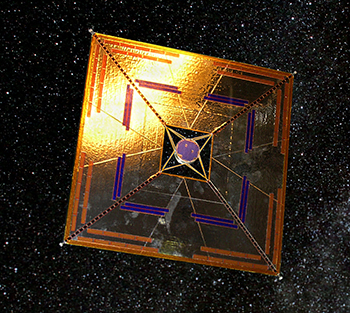 This image depicts the Japanese IKAROS spacecraft, which used its solar sail to control altitude and rotation speed. Yes, this trope is Truth in Television.
"In frigid darkness they slept, and as they slept, the cold winds of light between the stars swept them onward, slowly..."
— At the Mountains of Madness (Atlanta Radio Theater Company version)
Advertisement:

So you've got your nice big spaceship, but you have one big problem — fuel. It's heavy and runs out real quick.

The solution? Build a paper-thin mirrored sail a hundred kilometers across, and hang it in front of your ship - the pressure of light from stars will slowly propel your ship outwards. As you get closer to a star, you get more thrust, and as you get further away, the thrust drops off according to the inverse-square law. Using the thrust to move directly away from the sun is rarely the goal, since the acceleration is low and continuous and doesn't usually equal the sun's gravity.

Like a sailing ship, which uses the contrary force vectors of the water and the wind to choose its direction, a solar sail ship uses the contrary vectors of the sun's gravity (always in) and the sun's light (straight out). A sail ship angles relative to the sun to either increase or decrease its tangential orbital velocity, and therefore the radius of its orbit. In some cases, a solar sail might be used to "hang" a ship or satellite over a star in a place orbital mechanics don't allow (see: Dyson Sphere), but in this case it's more of a solar parachute.

Unlike a sailing ship at the waters, however, a solar sail cannot "tack" into the solar wind. Tacking requires a keel submerged in a medium with much greater drag (e.g. water), which a solar sailing vessel lacks. It is possible to lower one's orbit using a solar sail, by angling the sail to deflect the sun's rays forwards, decelerating the spacecraft and causing it to fall in closer to the sun; traditional watercraft-style tacking is out, however.

A close cousin is the electromagnetic sail, any of several similar systems that use a huge conductor or set of conductors (like kilometers of superconducting wire or a cloud of ionized gas) and an electromagnetic field to steal kinetic energy from passing solar wind, the corona of charged particles constantly streaming from a star. While the reflected sunlight used by a reflective solar sail provides orders of magnitude more push per surface area in the inner parts of a solar system, the working area of an electromagnetic sail is a "virtual sail" of electromagnetic force generated by a comparatively minuscule amount of material, and the average energy density of solar wind remains fairly potent far into the outreaches of a solar system. The net result is that these systems make up for the lower inner-system energy density by sheer size and operating range, while still being far lighter than a reflective solar sail, at the cost of requiring input energy, and the invisible "sail" being less visually interesting. An additional advantage for these systems, or hybrid systems mixing electromagnetic and solar sails, is that tacking and breaking are possible through a rare case of reversing the polarity actually being meaningful- because manipulating the orientation and strength of the field alters the direction and intensity of force between interacting electromagnetic fields, a keel's opposing drag can be replicated via secondary sails or "kite-tail"-type structures tuned to work at angles or opposition to the primary sail(s).

For interstellar voyages, the ship is usually propelled by a giant laser cannon in space shooting at the sail.

Real-life solar sailing is limited to attitude and rotational control, but it has still advanced by quite a lot despite the technology's infancy - Japan has already sent a solar sailing spacecraft on a Venus flyby trajectory in 2010, and other agencies and groups are planning to launch solar sails for purposes other than to test the sail itself.

Common in hard science fiction, or as Techno Babble for Space Sailing starships.