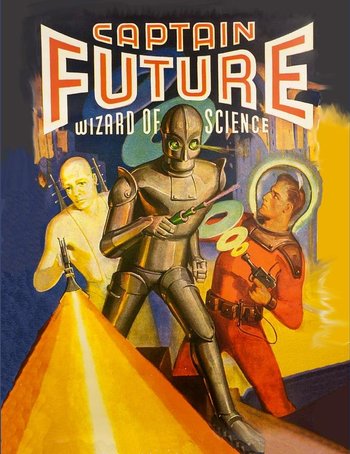 Captain Future was a Space Opera adventure series created by Mort Weisinger and mostly written by Edmond Hamilton, with occasional contributions by Joseph Samachson and Manly Wade Wellman. The stories originally appeared in the Pulp Magazines Captain Future and Startling Stories, and were later reprinted in book form.
Advertisement:

Captain Future is Curt Newton, a brilliant scientist and athlete who helps the helpless with the assistance of Simon Wright, a scientific colleague of his father's who is now a Brain in a Jar, and two robots created by Wright and Newton Sr.: Grag, a seven-foot-tall Dumb Muscle man of metal, and Otho, a shape-shifting Artificial Human.

The series was popular in Japan, where it inspired a 1967 tokusatsu series (under the title Captain Ultra, as it was commissioned as a filler for the Ultra Series timeslot) and a 1978 anime. Also sci-fi writer Allen Steele has written several reconstruction novels, including an Origin Story Avengers of the Moon.