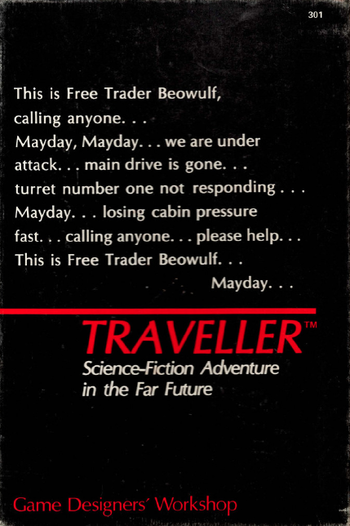 Traveller was one of the earliest published role-playing-game systems, originally designed by Marc Miller and first published by Game Designers Workshop (GDW) in 1977. Forty years later, it still has a rabid pack of followers, despite the fact that GDW closed down in 1996. The publishing license has passed through a number of hands since then.

Traveller was probably the first game of its kind to divorce the concept of skills from that of occupation or class. Characters did not enter the campaign young and untrained; rather, they had careers during which character development occurred. This was generally perceived as giving the game a more "three-dimensional" feel. While there were some assumptions about the campaign world, an interstellar setting called "the Spinward Marches", little actual information was initially provided, leaving the campaign world to the Referee's fertile imagination. The system wasn't static, though; the release of supplements and of subsequent editions of the system brought more detailed character generation, task systems, rules for skill improvement, and additional skills and rules for them. But Traveller isn't a role-playing system, because you can play GURPS Traveller, which is a different system entirely.

Traveller eventually came to describe an interstellar community of sorts, focused on a "Third Imperium", of which the original Spinward Marches was merely a small frontier area. Published and well-regarded science fiction was a major source of inspiration for aliens and their societies, and for various aspects of technology. A broad history was mapped out, and cultural differences were developed and illustrated. This led to a background in many ways richer than that of previous role-playing settings, yet without significantly limiting the referee. Again, the setting wasn't static; every release of Traveller or Traveller supplements brought new information to light. But Traveller isn't a role-playing setting, though, because you can play Traveller in a setting that is unrecognizable in comparison to what's in published material.

As with any RPG, Traveller can be an opportunity to develop characters, their likes, dislikes, habits, idiosyncrasies, motivations, and so on. The events of any particular session can be part of a grand story arc throughout the campaign, or not, if the players and referee choose not to play that way. The Traveller Supplements, over time, described a very-large-stroke history of the "Third Imperium", but the real story was in the gameplay and gamemaster's hands.

There have been many editions, most of which are available in .pdf format from Far Future Enterprises:

Editions
The financing deal Miller struck to produce T4 left him in debt, and he turned to licensing Traveller to other game companies. These versions were adaptations of the Third Imperium setting using the core mechanics of other RPG systems:A revision of the original ruleset followed next. All of the licensed variant rule versions of Traveller had their licenses pulled and ceased production to make room for:Miller himself continued to work on the game, however, and finally released: