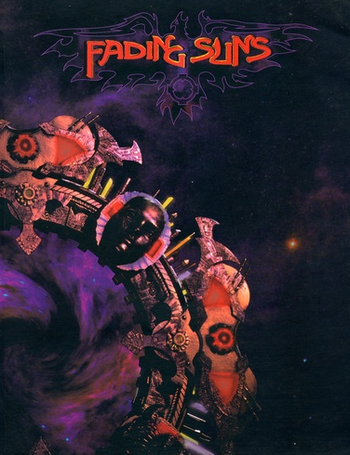 It is the dawn of the sixth millennium and the skies are darkening, for the suns themselves are fading. Humans reached the stars long ago, building a Republic of high technology and universal emancipation — and then squandered it, fought over it, and finally lost it. A new Dark Age has descended on humanity, for the greatest of civilizations has fallen and even the stars die. Now, feudal lords rule the Known Worlds, vying for power with fanatic priests and scheming guilds.
Advertisement:

Fading Suns is a role-playing game by Holistic Design, Inc., designed by Bill Bridges and Andrew Greenberg, also known for their work on The World of Darkness games. It's a soft science-fiction, space operatic game notable for its unusual, well-developed setting that is as teeming with action as it is with politics and courtly antics.

A great strength of the game is its versatility - do you like court intrigues? It's here. War stories? At least three fronts at the moment. Hard SF or space opera? We've got the ships, we've got the weapons. Guilds and fleets await. Soft SF, fantasy elements? Psionic powers, Ur ruins, Church demonology in the countryside. Lovecraftian horror? Daemons and Void Krakens. Cyberpunk? Guild affairs at the lowest levels of megacities. Dungeon crawl? Ur ruins and forgotten Republican complexes still here. Even D&D-style heroic fantasy, if you try.

The creators' idea for a game is Passion Play, that is, to view the adventures of the Player Characters as a saga of Mankind's redemption.

As of 2020, a new edition is in the works, moving the plotline by some fifteen years (about the amount of time in Real Life since the last edition) and significantly overhauling the game mechanics.

In the near future, Earth unified politically under the aegis of international megacorporations. Corporate rule quickly turned oppressive, yet the First Republic also saw exploration and economic development in the Solar System. Then, in the 24th Century, humans discovered the Stargate, the first proof (excluding several dubious findings on Mars) of extraterrestrial civilization. What's more important, the huge artifact opened the door to the Jumpweb left by the ancient race, dubbed Ur or Anunnaki.

The corporations seized the opportunity; quickly, though, they discovered their inability to exert control over the colonists, who, one community after another, declared themselves independent from Earth. Thus the Diaspora was born. Many of these communities were led by charismatic people, often forming ruling clans. These clans, for added splendor, often traced their lineages to royalty and aristocracy of pre-Space Earth, becoming noble houses.

The discovery of alien civilisations was a blow to already weak organised religions, and various sects, Anunnaki cults and others sprang up. Among them, the most notorious (and most hunted, due to its dangerousness to corporate and social order) was the Sathra cult, popular among starship pilots. In the 28th Century, a Christian priest called Zebulon took to the stars, hoping for some kind of sign. The illumination he found was beyond his dreams. He became the Prophet of a new, ultimate faith, preaching to humans and aliens of the Diaspora, performing miracles and gathering Apostles and followers, who after his death wrote the Omega Gospels and started the Church of Celestial Sun.

In the early to mid-fourth millennium, inspired by the Church and ideas of free trade and philosophies of human rights, the people of the Diaspora united again, forming the mighty Second Republic. It was a period of unparallelled progress; people settled countless worlds, scientists were on track to prove anything was possible, illnesses and hunger belonged to legends, and medical care made even the most suicidal of extreme sports safe. But all things come to an end.

Closing to the turn of millenium, cheap robotic and alien labour left many jobless, scientific experiments began to turn Frankensteinian, and the man-on-the-street linked the Republic with heavy taxes and political squabbles. And above all, stars began to fade. While one by one, border worlds were leaving the republic, at its heart people turned to noble houses preaching the ideals of noblesse oblige. The ten most powerful of these took up arms to fight the separatists, but to save the Republic was not their intention. Finally, the Ten conquered the capital world and the Second Republic came to an end.

The first half of the fifth millenium became known as the New Dark Ages. Most people became simple peasants, the Church prohibited advanced technology, nobles ruled from their castles, and remnants of Republican know-how formed Guilds. When barbarians of former separatist worlds invaded, one man - Vladimir of House Alecto - stood to fight them. He managed to unite the forces of the Known Worlds (as the core worlds of human space were now called) behind him and drove off the invaders, but was assassinated during his crowning by an unknown assailant (though gossip says he was killed by daemons).

Vladimir, however, did leave an apparatus of administration - and a precedent. In the 50th Century, one Imperial claim unleashed an avalanche, plunging the Known Worlds into a five-way (as five of the original Ten perished or lost their influence in the meantime) war, with the Church and Merchant League eyeing the situation in case of a possibility to establish a theocracy or another republic. Ultimately it was Alexius of House Hawkwood who managed to gather the support of the Church and League, forged an alliance with Houses al-Malik and Li Halan, defeated his opponents, and crowned himself as Emperor Alexius the First.

The new Emperor took swiftly to rebuilding the Known Worlds after the war. Instead of imposing his rule by force of his army, Alexius opted for a more charismatic and peaceful lead, by inspiring others to join him and stirring the old power structures to release the eager young. Thus he started a period of opportunity and hope - a perfect time for those who want to forge their own destiny.

... And this is when the Player Characters appear.

The original RPG also spawned a few spin-off games and other media:

A character sheet, listing the major factions of the Known Worlds, can be found here.