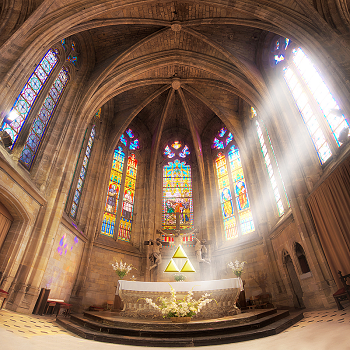 The Holy Trinity of triangles
Advertisement:

The Church that is Always Lawful Good or Neutral Good. It is honestly interested in the saving of souls, promoting spiritual growth, and are generally shown to be simple, pure, and Good, like the Big Guy upstairs.

These are the Churches where you can find religious people good with children, animals, and the elderly. Kindly priests and other religious types ready to give help or good advice to any troubled heroes are to be had here, and in the more fantastical types of setting, clerics give healing of both the physical and spiritual to the wounded adventurer and resurrect the occasional dead teammate. Should the heroes ever meet The Pope or local equivalent of this church, more often than not, they will find themselves standing before a Reasonable Authority Figure very ready to hear what they say.

In Speculative Fiction settings, the more likely you have an Always Chaotic Evil monster race that is hurt by holy powers, the more likely it is that the church will be good instead of evil. Sometimes this kind of Church may be portrayed besides one of the corrupt or evil ones for contrast and to help emphasize the pure goodness of the religion.

Most Real Life churches would see themselves this way, and a good many of them are right, but even so, No Real Life Examples, Please! - This means that they are also Too Common anyway.

This will be replete with Good Shepherds, but they can also be found in the Corrupt Church, just as Sinister Ministers might be found here.

Sub-Trope of The Church. Contrast Path of Inspiration. The Evil Counterpart of this trope is the Corrupt Church. The polar opposite is Religion of Evil. Compare Church of Saint Genericus.