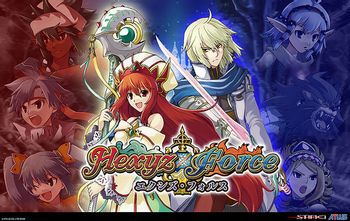 Hexyz Force is a PlayStation Portable game released in Japan on November 12, 2009; and in the United States on May 25, 2010. It is a collaboration between Sting Entertainment and Atlus.

Long ago, Norvia, the Goddess of Creation, descended from the heavens. Using the Holy Vessel, a divine chalice charged with all Force (the spiritual energy in the universe), she created life and the Divinities, shepherds of existence. After some time, Delgaia, the God of Destruction, brought about a great calamity known as the Gods' Remorse. He intended to return all Force to the Holy Vessel, returning Berge to the void. The Divinities sacrificed themselves to defeat Delgaia, delivering Berge from doom and sealing the God of Destruction away deep within the earth.

As Berge lay in ruin, a result of its bitter war, Norvia made a covenant. She would restore Berge to its former beauty on one condition. An Hour of Judgment would eventually come to pass, then the world would have to decide its ultimate path: creation or destruction.

The game takes place in a world named Berge, which is divided into two sides; the "Lustrous" side, the world of no night, and the "Darkness" side, the world of no day. This game has 2 main protagonists: Cecilia (Light), a priestess who is tasked with stopping the Hour of Judgement, and Levant (Dark), a defected former member of the Empire of Rosenbaum. Together, they must stop the world-conquering ambitions of Emperor Axel, who seeks to take control of the Hour of Judgment for himself.

The game's uniqueness lies in the scale of creation and destruction where each action the player makes will cause the balance to change and will determine the ending.

And as a side note, this game is not a part of the Dept. Heaven series.