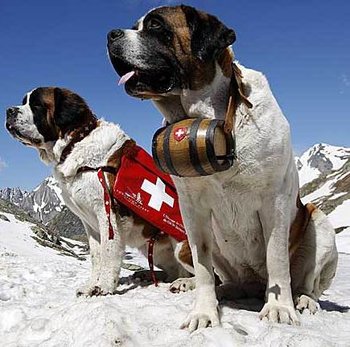 Saint-Bernard dogs are often depicted in media as carrying barrels of brandy (or, in more kid-friendly media, hot chocolate) around their necks, which was used to warm rescued victims from the cold. The monks of the Saint Bernard Hospice deny that this was ever used in Real Life, and instead the early depiction came from an early painting.

The idea that the dogs could do this, or that a drink could even save someone from hypothermia was examined and busted by the MythBusters. Alcohol would, in fact, endanger their lives because the warming effect is caused by increasing heat flow to the extremities, which would lower the core body temperature and accelerate the onset of hypothermia, though if rescue was imminent it might have the benefit of delaying frostbite. (That said, dogs are often trained to be able to sniff and dig out people trapped by natural or man-made disasters. The handlers of the dogs often carried brandy to try to warm up the people the dogs dug up before getting them to safety, which is probably how the myth got started.)

A common gag in cartoons, especially Warner Bros. and MGM cartoons, involves the dogs actually taking swigs of the brandy for themselves or the brandy making the survivors drunk.

For other types of animal rescues, see Heroic Dog, Timmy in a Well and Pet Gets the Keys.