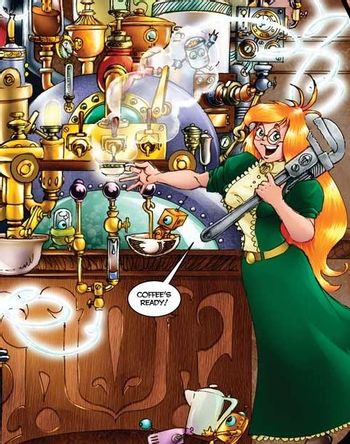 Science, as we know, involves lots of interesting glassware filled with bubbling fluids, condensing, percolating, spinning and being pushed through tubes. A pan across such equipment establishes that we're in a laboratory. When the pan ends with a scientist pouring the final product into a martini glass, adding an olive and drinking it, that's this trope. The drink doesn't have to be alcoholic.

There is a magical version of this trope, replacing the scientist with a wizard or witch. The Technicolor Science becomes Technicolor Magic, but looks remarkably similar. In essence, extensive arcane equipment is used to make an unexpectedly mundane drink.

Often a subtrope of Mundane Utility.