Film / Back to the Future Part III 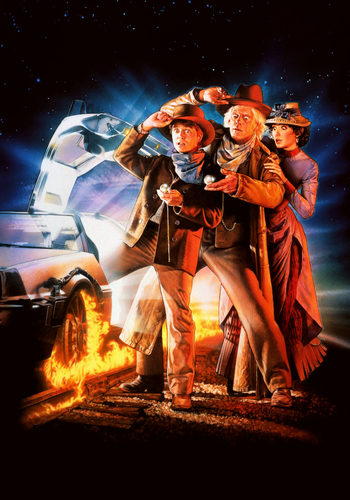 They've saved the best trip for last... but this time, they may have gone too far.
1955 Doc Brown: [shocked] Great Scott, it's me! Then, it is true. All of it. It is me who goes back there... and gets shot...
Marty McFly: [determined] It's not gonna happen, Doc... After you fix the time circuits and put new tires on the DeLorean, I'm going back to 1885 and I'm bringing you home.
Advertisement:

When we last left Marty at the end of Part II, he was once again stranded in 1955 after a lightning bolt hit the DeLorean with the Doc still inside it, causing him to warp somewhere in time. However, the Doc sends a letter via The Slow Path, informing Marty that he is alright and happy, living in the days of the old west. He tells Marty that he hid the DeLorean so that Marty, with the help of the younger Doc of 1955, could repair it to return home, instructing him to destroy the time machine after doing so. Marty and the 1955 Doc exhume the DeLorean hidden by 1885 Doc Brown. However as they're doing so, they discover the 1885 Doc's tombstone, which states he was shot dead by Biff's famous ancestor, the outlaw Buford "Mad Dog" Tannen seven days after sending the letter. Marty disregards Doc's advice in the letter and heads for 1885 to save him. Trapped yet again when the DeLorean fuel line is ripped upon reaching 1885 (with gasoline yet to be marketed as fuel for a long while), Marty and Doc attempt to repair the time machine before a showdown with Buford, only for Doc to fall in love with teacher Clara Clayton (played by Mary Steenburgen).

Back to the Future Part III provides examples of the following tropes:

Marty: Hey Doc! Where you goin' now? Back to the future?
Doc Brown: Nope. Already been there!
Feedback