Film / At Home Among Strangers 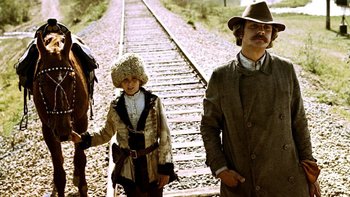 At Home Among Strangers is a 1974 film from the Soviet Union directed by Nikita Mikhalkov. Eduard Artemyev composed the music.

It is 1920-ish in the Soviet Union. The Russian Civil War has been won, with the victory of the Bolsheviks and the defeat of the anti-Communist Whites, but things are far from settled in a Russia that is just emerging from revolution and war, with leftover White Russian bands still roaming the interior. The central command in Moscow, desperate to buy food to feed a starving country, sends orders out to the various Cheka units to send confiscated gold to Moscow. (The Cheka is the original Soviet secret police.)

In a small town somewhere not far from a border, five old friends—Shilov, Sarichev, Kungorov, Zabelin and Lipyagin—are Cheka members and veterans of the Civil War. Sarichev, the local Communist Party leader, issues orders to send all the gold they've confiscated, a whopping 500,000 rubles, on a special train to Moscow. Shilov, his most dependable man, is given command of the mission. Soon afterwards Shilov is murdered, but the mission goes forth regardless.

The Cheka men go on the train to Moscow but are attacked by assassins led by a man named Lemke, who kill them and steal the gold. Lemke and his buddies hop another train, which is promptly attacked by an entirely different group of thieves, a band of White Russian bandits led by a fellow named Brylov (played by Nikita Mikhalkov). All of Lemke's buddies are killed in the raid and the gold disappears, so Lemke pretends to join Brylov's band, so he can find the gold. Meanwhile, Shilov turns up very much alive, the corpse previously discovered having actually been someone else. Shilov being alive, and having once been in charge of the gold shipment, the suspicion falls on him. In order to both clear his name and recover the gold, Shilov also pretends to join Brylov's gang of bandits.