Literature / The Apprenticeship of Duddy Kravitz 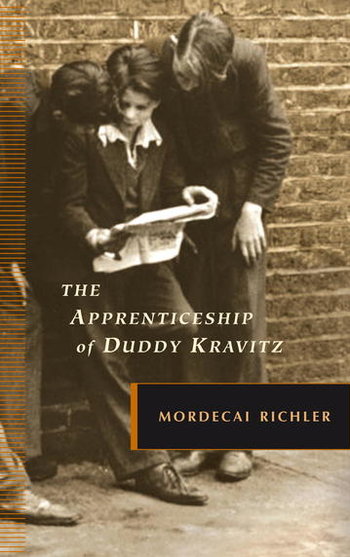 The Apprenticeship of Duddy Kravitz is a 1959 novel by Canadian author Mordecai Richler.

A Coming-of-Age Story, the novel follows the title character as he tries to climb the social ladder in 1930s and '40s Montreal, hoping to one day become a big shot like neighbourhood "golden boy" Jerry Dingleman and measure up to his big brother Lennie in their family's eyes. Along the way, the book explores themes of Jewish identity, social class, antisemitism, wealth, corruption, and alienation.

Richler's fourth novel, and perhaps his best-known, Kravitz was adapted as a feature film in 1974, directed by Ted Kotcheff and starring Richard Dreyfuss, Randy Quaid, and Jack Warden. The story was also adapted as a stage musical by David Spencer and Alan Menken.

The book and film contain examples of: