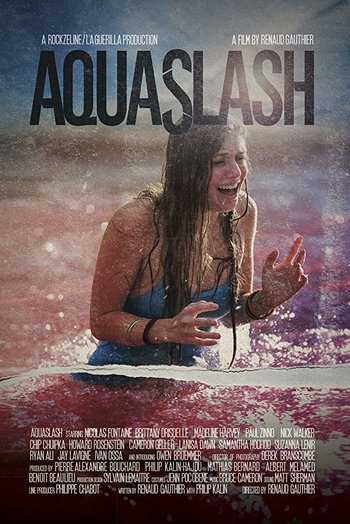 Aquaslash is a 2019 Canadian horror comedy written and directed by Renaud Gauthier. The film was shot in Canada

The graduating class of Valley Hills Highschool celebrates the end of the school year with an all-weekend 80s-themed party at Wet Valley Water Park. Josh and his band, "The Blades" are set to perform the night before the big water slide competition. What they don't know is a mysterious killer is offing people and plans to turn the competition into a literal bloodbath. Meanwhile, the park's owner, Paul, is planning to sell the park to Josh's father, unaware that he's having an affair with his wife, Priscilla, who he in turn is cheating on with a teenage. Josh is caught up in his own love triangle when he reconnects with his old flame Kim, enraging her current boyfriend Tommy.

All of this infidelity, drama and business intrigue is really just a set up for the gruesome death scenes, though. So no worries if you're not following.