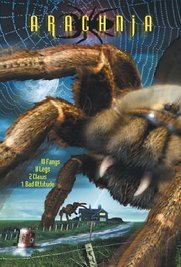 Arachnia is a 2003 Direct to Video Sci-Fi Horror film by Edgewood Studios, the company behind Time Chasers and Icebreaker.

A college professor and his students survive a plane crash caused by a meteor shower. However, these meteors awakened giant, ravenous spiders from prehistoric times. Our heroes must team up with a local farmer to end the arachnid menace.

It was given the RiffTrax treatment in 2016.