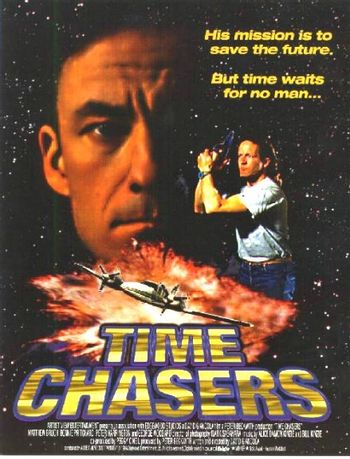 Time Chasers (aka Tangents) is a 1994 science fiction film that follows the adventures of an amateur inventor who goes through time with his female accomplice to stop an evil megacorporation intent on changing history for profit.

Physics teacher and amateur pilot Nick Miller has finally completed his quest of enabling time travel, via a Commodore 64 and his small airplane. With a teacher's salary, however, this has left him almost bankrupt, but an ominous television commercial for a company called GenCorp inspires him to seek funding from the private enterprise. Nick uses a ruse to bring both a GenCorp executive and a reporter from a local paper on a trip through time, but is pleasantly surprised to learn that his old high school classmate & eventual love interest, Lisa Hansen, is the reporter in question. One unimpressive trip to 2041 later and Gencorp's executive, the fashionable Matthew Paul, quickly arranges Nick a meeting with the company's transparently evil CEO, J.K. Robertson. Impressed by the potential of time travel, Roberston offers Nick a licensing agreement on the technology, over Lisa's misgivings.

Still, the reporter agrees to go on a date with Nick, and the couple enjoys a quick trip to a '50s malt shop before going back to 2041, which is suddenly a total dump. After a close encounter with two bands of wasteland survivors, Nick and Lisa confront Robertson, who stubbornly refuses to not destroy the future and tries to get them arrested. The heroes escape and attempt to go back in time to convince Nick's past self not to give GenCorp the time travel technology, and things become much more complicated.

Turns out Roberston and Paul have a second time transport, and attack Nick and Lisa's plane on arrival in the near-past. Lisa is killed and the plane brought down, so Future-Nick tries to get to Past-Nick before Future-Robertson can. Past-Lisa is diverted from Past-Nick's demonstration and ends up investigating Future-Lisa's death in a plane crash, then she and Past-Nick meet up and start time traveling to figure out what the hell is going on. Meanwhile, Future-Robertson and Future-Paul abduct Future-Nick (and a gormless mechanic) and inexplicably take them back to the Revolutionary War to kill them.

Luckily Past-Nick and Lisa show up with some minutemen to save the day, only for Future-Robertson to counter them with Redcoats, and things really go to hell. Future-Nick is killed thwarting Future-Robertson's escape attempt, leaving all the future duplicates dead, and creating enough of a time paradox to ensure that Past-Nick destroys his invention before it can do any damage, thus undoing the events of the film. On the upside, Nick and Lisa meet in a grocery store. On the downside, Nick and Lisa get an innocent man fired from his job, presumably ruining his life.

, which became the basis for the documentary Addicted to Fame

, which delved into Time Chasers, its later notoriety, and his attempts to build on that sudden fame. The film was also featured in one of the RiffTrax Live shows, with brand new jokes Note (although they still poked fun at many of the same aspects as the MST version did).